In 1871 a small group of Christians had a desire to worship together in one centrally located place and under the leadership of the Reverend Billy Cox and H. E. Cleveland, the Bethlehem Baptist Church was organized. The first church was built on the estate of Mrs. Annie Garrett.  The plot of land is located between Preston and Lee streets in the five hundred block.  The building was made of logs.

As the membership grew, the members saw the need for a larger and better place of worship, so in 1872 the present location was purchased and given to the church by the Missionary Society. Mrs. Calllie Davis was the president of the Society at that time. 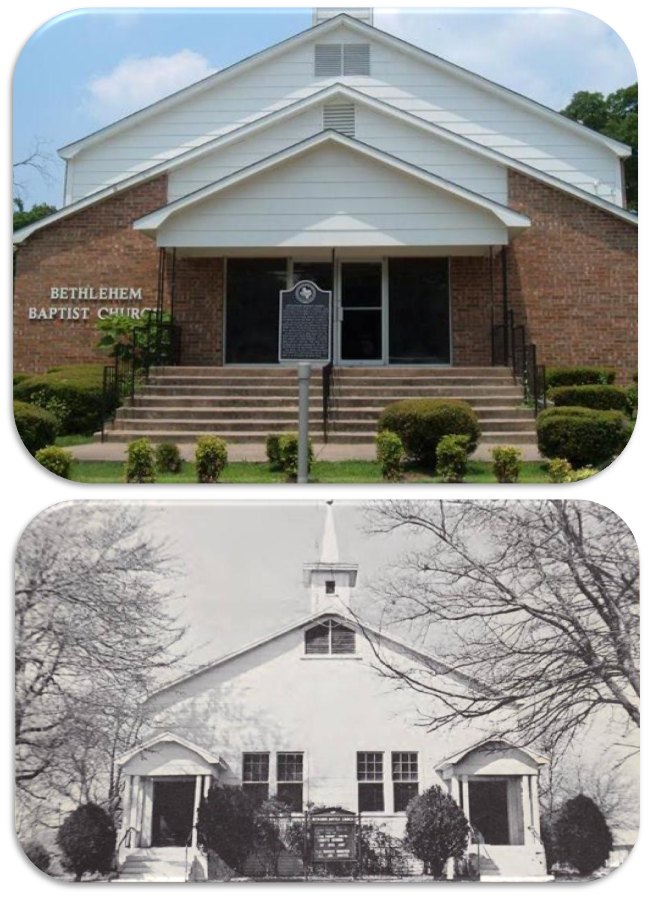 They also purchased a small building which was used until a larger building was purchased during the pastorate of Reverend H. L. Wirdlow.

The first Missionary Society was organized in 1871. Callie Davis was the first president. Other members were Sisters Edeline Christian, Secretary, and Mrs. Emma Edwards, Treasurer. Sisters Callie Davis, Edeline Christian, and Emma Edwards signed the deed to the lot along with the following trustees and deacons:  Rev. E. S. Silas, J. D. Locke, Littleton Knighten, John Blackman and Green Edwards.  Several years after the deed was signed other men were added to the deacon board and their names were added to the deed:  B. K. Johnson, Dock Johnson, Sam Harp, Peter Johnson, Will Morley, L. G. Stull, and R. B. Chapman.

In 1957, Jessie Higgs and Herbert Chapman were ordained as deacons, and later Matthew Jackson.  In 1969, Joe C. Dale and Roosevelt Ross and, in 1966, Cecil R. Jones was added.  In subsequent years the following men have been added to the board of deacons: Alvis Ryan, Dwight Mason, James Henson, Leon Smith, Melvin Harvey, and Charles Bowen.

The cafeteria was built in 1941 under the leadership of Rev. H. W. Cunningham.  In 1949 the church was rebuilt during the pastorate of Rev. U.S. Cornelius. April 27, 1978 the church elected its first Historical committee, with Mrs. Mattie Lee Roberson as Chairman. Mrs. Roberson passed before she had an opportunity to work with the committee.  She conceived the idea of preserving the history of the church.  In February of 1979 Mrs. Noble Chapman presented the church a Historical Case in Loving Memory of her late husband, Herbert S. Chapman.  Mrs. Noble Chapman was named Mother of the Church in 1986. 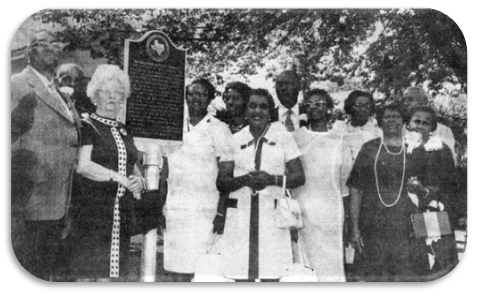 On August 26, 1979 the church extended the Call to Reverend L. S. Wilson, Sr., of Dallas, Texas.  He came the following Sunday and accepted the Call.  He preached his first Sermon as Pastor, October 7, 1979. The fellowship annex was built in 1981 under the leadership of Rev. L. S. Wilson.  Extensive renovation of the entire church was completed in the fall of 1988.

A constant source of strength and spiritual influence in the community, the church was presented an Our One-hundredth Historical Marker that was dedicated Sunday May 21, 1972. Bethlehem Baptist Church has been and will continue to be God's church doing God's work God's way.

Christian was born in Bonham, Texas, but his family moved to Oklahoma City, Oklahoma when he was a small child. His parents were musicians and he had two brothers, Edward, born in 1906, and Clarence, born in 1911. All three sons were taught music by their father, Clarence Henry Christian. Bonham is the birthplace of Charlie Christian, one of the originators of the electric guitar. Born there in 1916, Christian went on to become one of the most influential and innovative jazz guitarists in history, playing with Benny Goodman and many others. Bonham was incorporated in 1848, and is a city rich with Texas history. Beginning as a railroad stop, the city thrived as an agricultural center, and housed the Confederate military headquarters for the northern sub district  of Texas during the Civil War.
Those who make a Charlie Christian pilgrimage to Bonham will not be disappointed. Although the original house has been torn down, fans can visit the place where it stood until 2005. Christian is buried in Bonham, so devotees can bring flowers and visit the gravesite. On March 10, 1942, Christian's funeral service was held by the Bethlehem Baptist Church. In which he was also a church member who attended when he came to visit Bonham after long road trips. The Bonham-Fannin Museum of History has a permanent exhibit dedicated to Christian.  He was buried in an unmarked grave in Bonham, Texas, and a Texas State Historical Commission Marker and headstone were placed in Gates Hill Cemetery in 1994. The location of the historical marker and headstone has been disputed.
On July 20th, 2012, the Bonham City Council renamed the 100 and 200 blocks of South First Street as "Charlie Christian Street" in honor of famous jazz musician Charles Henry Christian. This street will run just south of Mr. Christian's headstone and Texas Historical Marker in the Gates Hill Cemetery. Coordinators of the bi-annual Booker T. Washington School Reunion hosted a ribbon cutting for this street in conjunction with their reunion activities.  The ribbon cutting took place on Friday, July 20, 2012 at the Gates Hill Cemetery and where everyone gathered to see a piece of history in the making.
In March 2013, Fannin County, Texas recognized the marker is in the wrong spot and Christian is buried under the concrete slab.